5 Reasons Not to Watch Bank Chor

The buzz is strong; the madness is real and the comic timing is on point.
If you’ve not been living under a rock, you would be familiar with the headlines Bank Chor is hitting - Chori Ke Posters, Chori Ke Jokes, Chori Ke Interviews, Bakwaas With Bank Chor etc. There is legit madness all around.
Since the trailer launch, Bank Chor has left people in splits for an array of reasons. The self-confessedly India’s stupidest comic thriller released in theatres on 16th June.

Here are the reasons NOT to watch this wacky comedy and suffer from FOMO:
Real Chors (or not)
After the dangerous chor, the cool chor and the smart chor comes the REAL chor who’s superstitious! He’s God-fearing, extremely religious and undertakes robbery Vaastu Ke Hisab Se. Mind you, he takes his work religiously serious. 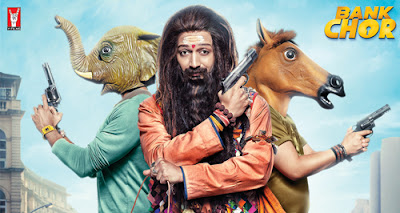 Tashreef song - A tribute to the bum!
We’ve heard songs which are tribute to the lips, eyes, mouth and the heart but Bank Chor has a song which is a tribute to the bum! It’s an anthem for those jiski life ne le li hai – tashreef! Bascially, everyone. When everything goes wrong in life, give a loud shout out -  #LagGayiTashreef


Comic thriller
Bank Chor is a story of the worst chors ever, Champak, Genda and Gulab. A simple Marathi manoos played by Riteish Deshmukh picks the worst day possible to rob a bank and recruits two idiots from Delhi. Think that’s worse? It only gets maddening with a tough supercop and a fashion jouno turned crime reporter.  A comic caper all the way!

Mad Dialogues
Be it Gulab, Genda or the Khushbudaar Bank Chor, the dialogues of this film are slapstick comedy and snappy! The hilarious comic timings and chemistry between the chors are guaranteed to make you laugh your lungs out.

For Rap, for Baba Sehgal
Yes! (Thanda Thanda Pani wala) The maddest rapper of our times, Baba Sehgal makes a cameo appearance in the film and on to top that has sung and composed a crazy song Bae, Baba Aur Bank Chor.

Need no more reasons, do you?
Meet the #BankChors in theatres near you and watch their madness unfold NOW!
Book your tickets here: m.p-y.tm/fbcr
Posted by Yash Raj Films at 22:48