Listen up & make way for another milestone. YRF Songs, the YouTube channel (www.youtube.com/YRFsongs) featuring music from YRF has surpassed 1 million subscribers.
Ranging from video and audio songs from diverse YRF catalogue movies, this channel offers an array of choices for all music lovers. YRF Songs YouTube channel was started on 9th April, 2010. Within 5 years, it has firmly established its position among the top 30 YouTube channels in India and has been growing ever since. 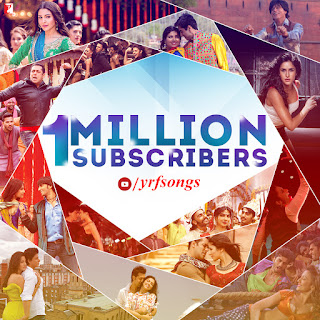 The channel is dedicated for exclusive release of YRF music. From the melodious tunes of ‘Daag’ to the trippy songs of ‘Befikre’ interspersed with everything in between, it is your one stop channel for all the songs from the house of YRF.
A look at some of the top streamed videos on the channel:

1. It’s the Arabic version of the FAN Anthem for the Jabra Fan in you.

2. Crazy moves, foot tapping music & a signature step you can’t get enough of.

3. It’s a musical delight with this medley, let the nostalgia take over.

4. Guilty of doing the ‘Tang Tang Tang’ step every time this plays? Re-watch it.

5. Trippy beats of ‘Malang’ is all you need to get your groove on for any weekend.

Don’t miss a song, indulge in the musical journey.