From the scintillating dance number ‘Nashe Si Chadh Gayi’, to ‘Befikre Official Trailer’ – which was the most awaited trailer of the year, to the melodious tunes of ‘Jag Ghoomeya’ - they were the headline stealing videos of 2016.
Here are YRF’s top 10 videos which ruled the internet. 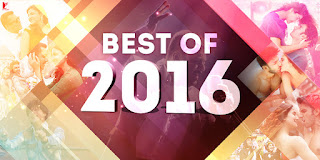 Jabra Fan
You may be a Fan of a movie, song or a sports player! Jabra Fan power cuts across boundaries for it is an ultimate celebration of FANdom. It’s an anthem, for the fan in you.

Jag Ghoomeya
A romantic ballad straight from Sultan’s heart to Aarfa, it transports you to a beautiful world of desi romance. Also, have you nailed the hook step yet? Re-watch and get on the ground.

BEFIKRE Trailer
A free spirited & a carefree ride. BEFIKRE trailer was one of the most awaited trailer of the year. In a first of its kind feat, the trailer surpassed a whopping 10 million views in 24 hours.

SULTAN Trailer
The power-packed trailer of SULTAN had blockbuster written all over it and rightly so, it broke all previous box-office records and in a month of its release, became the most-watched Bollywood trailer.

Jag Ghoomeya (Female Version)
Melodious tunes, magical vocals & heartfelt lyrics. The female version of Jag Ghoomeya brings out the romantic side of every young one in love.

440 Volt
440 Volt is a song which gets you grooving to its electrifying beats & desi setting which is full of swag.

Bid good-bye to FOMO & stay in the filmy loop.
Don’t miss out on the next YRF video, subscribe here NOW.